Portuguese Team to the Tokyo Finals

An incredible weekend in Tokyo, filled with unbelievable talent and elegance! We’ve closely observed the world's elite dressage riders from across the globe, who gave their best to achieve individual qualification and to bring the maximum honor to their country.

In a competition of 59 horse and rider combinations, for the first time in history, Portugal qualified as number 7 out of 8 nations, with a team mounted solely on Lusitano horses! An amazing achievement that allows us to dream big and conclude that the Lusitano is getting more competitive each day on the global dressage scene.

PORTUGUESE TEAM TO THE FINAL

With the new Olympic format, the teams of three make the team competition more exciting and diverse, allowing a wider range of nations the chance to make it onto the podium. The Portuguese team in Tokyo is made up of young combinations, all competing at Olympic level for the first time. The Portuguese equestrian tradition is known worldwide and respected by many. All the three horses scored above 70%, and their performances received countless compliments from the international dressage community.

Maria Caetano, 34, was the first team rider to compete. Following the injury of her top horse Coroado AR, Maria worked extra hard to qualify her youngest and less experienced horse Fenix de Tineo, who is now 11-year-old. The duo delivered a solid performance, evaluated by the judges with a final mark of 70,311%.

João Torrão, 28, is the youngest of the team riders. In the saddle of the promising 12-year-old Lusitano stallion Equador MVL, the duo danced with their usual charm and elegance, achieving a final score of 70.186%.

Exceeding the expectations in Tokyo was Rodrigo Torres, 44, and his 11-year-old partner Fogoso Campline, a horse bred by himslef at his family's stud farm, and educated through the levels to reach the pinnacle of the dressage sport! Their score of 72.624% not only had a major impact on the Portuguese team qualification, but also granted the pair their qualification for the individual medals. 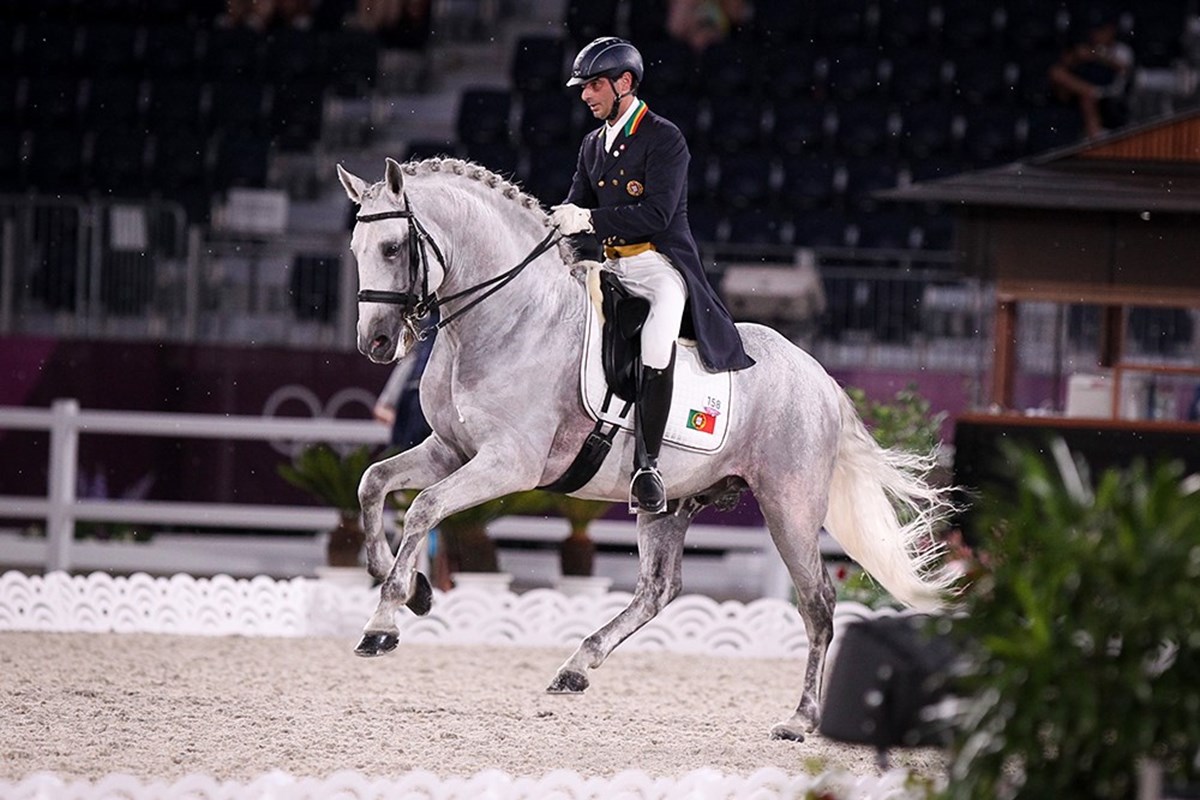 The combination Rodrigo Torres and Fogoso Campline were the only Portuguese pair to make it to the individual final.

Fogoso Campline (Rico x Amélia by Rajá) represents the ultimate dream of a rider who also happens to be a breeder: a horse bred at his family stud, educated from day 1 all the way through to Grand Prix by the rider himself, who is now representing the Portuguese flag at the individual finals in Tokyo. This powerful Lusitano stallion, who stands 1.72m, displaying an incredible conformation and strong, elegant limbs, leaves no one indifferent. The fact that Rodrigo knows this horse to his bones, allows the pair to deliver a sparkly yet solid performance – a dance of elegance, true understanding and faultless communication.

Rodrigo, who ended his test with a huge smile on his face, shares that «I am so proud of Fogoso! I felt him at his best at the most important moment of his career! What else can we ask for?»

The starting order for the Grand Prix Special at the 2021 Olympic Games in Tokyo has been published and can be seen HERE.

Eight different teams with a total of twenty-four riders will be competing for a place on the podium. The eight nations were decided by the highest team scores in the Grand Prix of all three riders combined, the new qualification system no longer allows for a drop score.

For tomorrow's competition, the riders are divided into three groups - the first two groups will go in reverse order of the team ranking: the 8th placed team from the Grand Prix will start first. However, the order of the last group is not yet known: the 'order to go' will be decided during a 60-minute break and will depend on the provisional ranking of the teams after the first two groups.

The order of go in the last group might not be the only surprise for tomorrow! As Tropical Storm Nepartak threatens to disrupt the Tokyo Games, it will be interesting to see if and how the team medal competition might be affected by the meteorologic conditions. Heavy rain and wind as well as the possibility for lightning are forecast and could seriously affect competition conditions at the Baji Koen Equestrian Centre.

Lusitano World wishes all the riders the best of luck for tomorrow!